We have a fantastic show planned for you!

Originally hailing from San Francisco, CA, Caitlin Peluffo is a comedian currently living in Brooklyn, NY. After a brief six year stint in art school where she studied performative video art (no, really…that’s a thing) she has expanded her talents to the stage. Peluffo has opened for comedians like Maria Bamford, Gilbert Gottfried, Gary Gulman, Colin Quinn, and the late Kevin Meany. She’s been featured everywhere from New York Comedy Club in the Big Apple to clubs nationwide talking about how she came to be such a lovable loose cannon.

She co-produces a monthly comedy show in Brooklyn with Emily Winter at Precious Metal Bar called Karen. She also recently participated in The Breakout Artist Series for Carolines on Broadway. With Caitlin, no subject is off limits, however, she did make a promise to her mother that she would never, ever discuss that one time she took those ‘whorish, yet tastefully executed’ photos for a guy she used to bang in the military. She may be a patriot, but a promise is a promise. 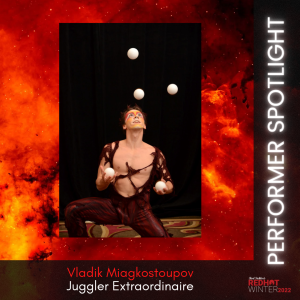 Vladik started juggling at 6 years old, at only 9 years old he already started performing professionally on stage. Since then he has worked in over 30 countries including in famous shows like “Lido” in Paris and “Cirque Du Soleil” around the World. Vladik combines a unique blend of acrobatics, contemporary dance and juggling. He has won numerous awards in many competitions and circus festivals worldwide. 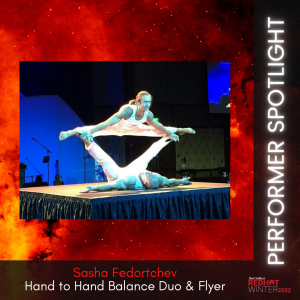 Sasha Fedortchev began his life in Moscow, Russia. He trained extensively from the age of seven at the gymnastic schools in Russia. After finishing circus school he was approached by the widely popular Cirque du Soleil (Quidam). He traveled with Cirque du Soleil performing Vertical Rope and Aerial Chiffon. Currently, he’s performing Hand-Balancing Act and Aerial Silks Act for exclusive events including: corporate meetings and conventions, special openings such as the Star Wars, Spider Man premiers. Sasha has also appeared on network television shows such as The Celebrity Circus, the American Music Awards with Aerosmith, and a  Grammy Awards performance with Beyoncé. 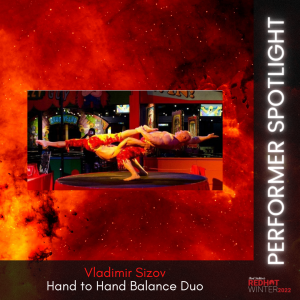 Vladimir Sizov is an IFBB Professional Bodybuilder with a long and varied performing arts background spanning multiple disciplines. Originally from Moscow but now living in Los Angeles, Vladimir’s athletic pursuits began at age 7 with rigorous training in gymnastics, which eventually led to his acceptance into the Red Army Gymnastics Team at age 14. The following year, during his competition debut at the USSR national gymnastics championship, he won First Place in the team competition.

At age 20, Vladimir applied his gymnastics training to circus arts, joining the Moscow Flying Circus with a trapeze act that quickly became a star attraction. This renown ultimately led to Vladimir’s emigration to the United States, where at age 25 he began performing with the world-famous Cirque du Soleil in Las Vegas.

Given Vladimir’s long history as a performance artist challenging the limits of the human physique, it was only natural that he would eventually find his new athletic calling in the field of competitive bodybuilding. Having received broad exposure as a guest performer during the 2000 Mr. Olympia contest, Vladimir went on to win his IFBB Pro card in 2010. In addition to his athletic pursuits, Vladimir has also recently begun a career in screen acting, with recent appearances in several Hollywood movies, including Tom Cruise’s Jack Reacher, Water for Elephants, and Agents of S.H.I.E.L.D.

Jer-Dog brings to the stage a powerhouse performance delivering fast paced one-liners and story-telling, while simultaneously incorporating characters, voices, sound effects, and audience interaction. His captivating, blue collar style has mass appeal without being generic or politically correct. Jer-Dog also dives into material about the challenges of transforming from an obnoxious party-animal into a domesticated stay-at-home dad.
Raised in a small town in Iowa, Jer-Dog began his comedy career almost 20 years ago, at the age of 19, by traveling for hours to cities with comedy clubs and karaoke/sports bars facing some of the toughest crowds imaginable. He further developed his showmanship skills during a 10-year tour with “Shenani-Guns” Comedy Wild West Show, performing at Six Flags and state fairs. 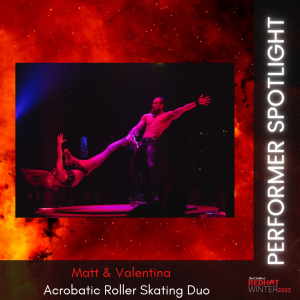 Matt & Valentina are an acrobatic roller skating duo from the United Kingdom.

Both coming from professional dance backgrounds, they have performed as dancers all around the world and met dancing in a theatre show in Blackpool, UK.

After working together as dancers for a couple of years they decided to change course slightly. With the Hungarian circus heritage of Valentina’s father, they began training and developing a roller skating act at the Hungarian State Circus School in October 2014.

Getting the hang of skating quite quickly they created a new and unique act which they debuted in Dubai 2015. Since then they have worked in many well known shows and theatre’s such as the Margitsziget Theatre – Budapest (Hungary), Shuchbecks Teatro Dinner Show – Munich (Germany), Ohlala Circus – Zurich, Madrid & The Folies Beregere (Paris), Cabaret Maldito – Circo de Los Horrores (Spain), The Box Soho (London), Cirque D’hiver Bouglione – Paris (France), ‘Viva La Broadway’ – Broadway Theatre (Macau) and many more cabarets, theatres and TV shows.

They are currently performing as the finale act in the number one hit show ‘Absinthe’ at Caesars Palace, Las Vegas where you can watch them perform nightly!

Joe Kirk is an independent singer-songwriter based in Los Angeles, California. He appeared in the seventh season of The Voice US with Adam Levine as his coach. The rising star almost immediately released a single “Believe”. He continues to pursue his dream of music and released an EP “All I Know”.